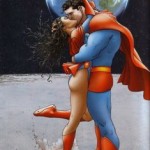 If you can’t wait for the 2012 re launch of the Superman movie this is a great fill in for the time being. All-Star Superman is based on the 12 issue miniseries originally written by Grant Morrison and Frank Quitely.

It really is as good as any cartoon could get. The story follows the main theme of the comic series along with a few changes to make it more digestible for those not familiar with the comics.

I haven’t read a bad review of the movie as it is pretty much an animated masterpiece and if the 2012 movie had been cancelled this would have been a great replacement.

The voice acting in the movie is done by a great cast who you will pretty much recognise even if you can’t put a voice to a name.

Overall it’s a big step up from Doomsday and Public Enemies and well worth a worth if you get the chance.