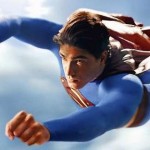 Superman has always made awesome movies, and to go with them they have some awesome trailers. But in recent years the movies have been sparce and never too stable with film makers wanting to always try another direction. One thing we can count on is fan made trailers will be made.