On Set Picture of Antje Traue as Faora

Other than the main cast there is still a lot left unknown about the new Man of Steel Movie. The reboot of the movie franchise is looking to reflect the new look Superman from the comics.

From some recent on set photos which have spread round the internet we can see the first images of Antje Traue as Faora who will be one of Lord Zods generals.

The pictures also show the new look Superman costume in full with the noticeable changes such as he no longer gets mixed up and puts his underpants on the outside of his trousers and it looks to be a latex / rubber finish which would be a lot harder to hide under his Clark Kent costume.

Something else which is fairly interesting from the photos is the motion capture guy on set with Antje Traue. He’s obviously going to be a bad guy but who. Could it be a Doomsday pet of Zod’s. Only time will tell. 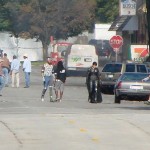