Is that Doomsday in the new Superman Movie 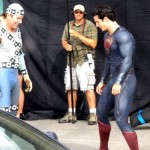 The new Superman movie already promises fans the world with a new darker side to the super hero along with a modern costume and it kicks off with an epic cast.

So far we have seen a lot of pictures of Smallville and one surprise character that has started appearing more and more on set is the motion capture dude.

When he first appeared on set fans assumed it may be a General Zod arriving from the Phantom Zone but here we see him in a hand to hand fight with Superman.

It’s looking more than likely that this is going to be Doomsday or Brainiac teamed up with Zod.

The close up shots also show Supermans new costume minus those old pants, it’s about time he learnt how to dress himself before saving the world. The new costume will likely be based on a Kryptonian law enforcer or guard type as it was sometimes refereed to in the comics. 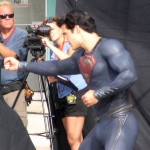