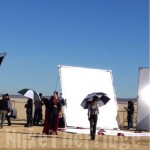 The Superman – Man of Steel movie has just finished filming on the Edwards Air Force Base in California. With a lot of the other secrets being let out of the bag like a possible Chloe Sullivan cameo and the idea of a CGI Doomsday thanks to the open setsb this was kept a lot more secretive.

The Edwards Air force Base is thought to be the stage for a UFO crash site or at least where they may be keeping an alien space ship. It looks like the military may feature a lot in the new movie keeping it fairly similar to the current Action Comics run.

The picture features our new Superman Henry Cavil and Amy Adams who will play Lois Lane. Amy has had a much larger part in the filming than any other Lois Lane in the past and it’s interesting to see how they have evolved the movie franchise.