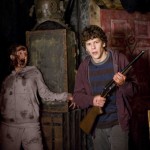 The latest news on the Man of Steel sequel aka Batman vs Superman confirms te next Lex Luthor as Jesse Eisenberg (Zombieland).

The news comes as a major suprise to fans as there have been numerous rumours over the last year from Bryan Cranston to Michael Rosenbaum returning to the role.

Although it sounds like a very random casting it makes perfect sense. Each comic book movie which makes a big impact does it because part of it was based on a formula which has worked in the past like shooting films Nolan style or casting an unknown actor to play a major role.

Jesse Eisenberg fits the bill for Lex Luthor in a few ways.

Arguably the most popular Lex Luthor we have seen in recent history has been Michael Rosenbaum. When he was cast he had a simior background being in comedy with his biggest role prior to Smallville being Zoe, Duncan, Jack & Jane. Not a typical super villain in theory but in practice he was an epic choice.

Casting Heath Ledger as the Joker was a major suprise at the time to fans and it got the movie noticed due to so many fans complaining. In the end he did an awesome job and turned it all around to be one of the most memorable villains in any comic book movie.

So Jesse Eisenberg could be an awesome choice for Lex Luthor but it could also go majorly wrong depending on the part Lex will play in the new DC movieverse. Either way he can’t be worse than Kevin Spacey.