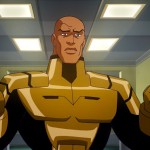 Is it even possible to have a great Superman movie without his arch nemesis Lex Luthor. Well the Zack Snyder doesn’t want to take any chances. The latest rumors going round the movies set at the moment are that Lex Luthor may have been added to the agenda for a cameo part to lead into the sequel.

Since the release date got pushed back fans have been asking why and how. 2012 is already going to be one of the biggest years for comic book movies we have had ever and the Return of the Superman franchise would have made it mega epic.

As for Lex Luthor there have been reports of his name popping up on set and Bradley Cooper was even names as a possible to play the part.