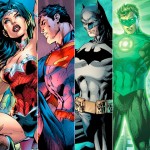 The Man of Steel movie did wonders for Superman bringing him into the cinema stronger than ever before. WB and DC have got big plans for the future of comic book movies like Justice League which now seems to have a green light.

If that happens it could mean DC and WB will dominate comic book movies in the future with just Batman and Superman in the same movie. If you add the Green Lantern, Wonder Woman and a whole host of other DC heroes to a movie it’s going to be legendary.