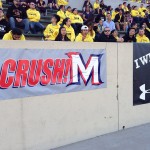 The Man of Steel sequel has started filming at a college Football game in LA. Filming was breif but they are reported to have shot several scenes at the game including a fight scene during the game.

Neither Ben or Henry were seen on set but Zack Snider was seen on set and the crowd were told that the title of the movie was Batman vs Superman. They were also given Gotham City University and Metropolis State jerseys and given the chance to win Nokia phones and TVs.