Status of the next Superman movie is unclear 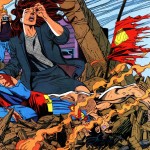 For me at least it seems like it was decades since Superman Returns was released but it was only 2006. It was an awesome movie and if you found this site you have probably seen it and can make up your own mind. But unfortunately the general audience who hadn’t followed the other movies couldn’t see how a lot of it would happen. Why was Superman in space for five years, how did Lois all of a sudden have a baby with the man of steel and why was she living with Cyclops from the x-men.

Either way once the movie had been released a lot of the suits at WB decided they need to reinvent Superman, replace the old movies with new retakes on how Clark Kent became the man of steel and to give a chance for new fans to get grips of the story so far.

Unfortunately the next Superman movie which they could have made for 2009 had been pushed back and got caught up in a legal case with the original heirs of Superman, co-creator Jerome Siegel.

With a lot of legal work against the movie it seems to have come down to a two way fork in the road, either DC and Warner start work on a movie before 2012 or they may not make another Superman movie for decades.

To be honest it may not effect the next movie as much as it would seem, it hasn’t effected Smallville but may mean we won’t see a Smallville themed movie after they stop shooting the series.