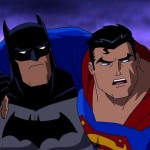 The recent release of Public Enemies boasts a massive list of characters from the DC Universe, some you will know with some you probably wont. But over all it is probably the best comic to cartoon I have seen for a long time.

The story leads with a world where Lex Luthor is elected president after turning over a new leaf and wants to help the world without the need of superhero intervention. He starts off well by ending war’s and helping the economy, he even gets a strong team of super heroes and villains on the payroll. With a team consisting of Captain Atom, Starfire, Katana, Black Lightning, Power Girl, and Major Force – Lex is finally in control of the country.

Soon a huge chunk of Krypton starts heading towards the earth Lex puts together a plan to save the entire world without the need of super heroes and even tried to get Superman out of the picture by turning the public against him.

Superman is blamed for the death of a reformed Metallo and with a $1billion reward a small army of super villains decide to go after the man of steel.

Moving on Lex fails to save the world with his missiles and decided it would be better for the world to be hit and rebuild a new world in his image. Superman and Batman move on to find out all they can from Lex about the asteroid and use his information to make a plan B with aid of Hiro the Japanese Toy Man.

Hiro’s plan is to fly a huge robot missile to the asteroid and blow it up which gets interrupted by an angry power tripping Lex which takes out its targeting system so Batman needs to manually fly it into the giant chunk of Krypton.

Batman survives in an escape pod and Lex manages to survive a few punches from Superman somehow.
Overall its an amazing cartoon and great fill in till we get the next Man of Steel movie.