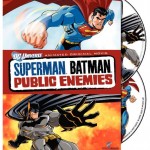 Just when you think Superman has done it all, he saved the world from mole people, defeated a super computer from his home planet, traveled through time and returned from the dead. Now he has to face a world where Lex Luthor has all the power and only the Man of Steel and Batman can stand between a world facing a planet killing Kryptonite asteroid and a world ruled by the evil Lex Luthor.

Based on a comic arch from the great Jeph Loeb and Ed McGuinness this straight to DVD movie looks to be awesome. Still no reival to the origional graphic novel but none the less it will be a no brainer to watch.

In the story Lex has control over the public and playing on peoples greed he offers a $1 billion reward which temps some of the greatest villens and even some of the super heroes to hunt down Superman and Batman before they can save the world…Again.

The DVD and Blu-ray will be available september 29th.