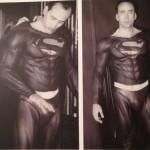 The Superman Lives project is one of the most well known and biigest comic book movies to ever get cancelled. There wasn’t really any specific reason for it to be never made other than delays, budgets contracts other than that it was set to be an amazing movie.

Even if Superman Lives did make it to a release we still would have had Superman Man of Steel as its a good time to start a new.

It was originally made to be a kind of reboot to the Superman movies and be based on the most greatest comic series ever made the Death Of Superman.

The script came to light recently thanks to fans looking into the project and a very interesting article at Voicesofkrypton.net which asked Tim Burton the projects final director about the movie.

Below is an excerpt from the article where Burton explains it could have been Will Smiths fault the movie got canned.

“If they’d just allowed us to make the film,” adds Burton, “I think that we could have done something interesting. And, you know, it was going to be an expensive movie. They made a choice. They had this, SUPERMAN, and WILD, WILD WEST, and they opted for that and canned this one. It’s frustrating. I like to be positive, but I really feel that I wasted a year of my life. That’s a terrible feeling. You never want to feel that in anything you do.”