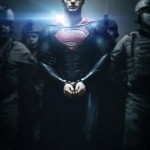 So far the pre release material for the Man of Steel hasn’t given much away about the story, even looking at the first teaser trailer all we got to see what that he can both fish and fly. Obviously not at the same time he isn’t Iron Man.

The latest teaser poster for next years mega movie shows us a whole new insight into the movie as Superman appears to be under arrest by the US army.

This is a massive tease to most people wanting to see the movie but for the hard core supes fans it tells us everything you could want to know about the origin.

Obviously this shows us he has been arrested by the US army but how, its likely some sort of understanding makes him a wanted man and his sense of decency makes him turn himself in.

It also tells us the movie will follow closely to the new rebooted Superman comics where he starts out as a very misunderstood hero who later gains the trust of Metropolis.