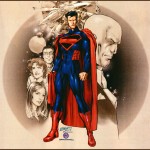 It was one of the most bizarre movie announcements since they cast George Clooney as Batman. due to legal issues id WB and DC didn’t have a movie released by the end of 2012 they would risk losing the movie rights to the original Superman origin to the estate of the original creators.

After this the new Man of Steel movie was rushed into production and given a December 2012 release date so they could keep the rights to the movies. But just recently it’s been revealed that the release date had been pushed back to June 14th 2013.

This is likely due to WB and DC no longer relying on the original Superman origin because come September there will be a whole new costume, new actor along with reinvented origin story to carry the iconic comic superstar.

Thanks to Variety’s Jeff Sneider for the news.