Superman vs the Elite Trailer 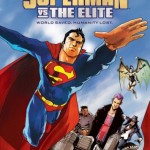 DC Comics have released the first official trailer to the upcoming animated movie Superman vs the Elite. The Elite are a group of Anti Super Heroes who nearly killed Superman in an Action Comics story line a few years ago. It is considered by fans to be the best Superman story of the decade and will keep fans more than happy while we wait for the Man of Steel Movie release date early 2013 which cant come any sooner.

This first trailer has been released through MTV Geek with more to be seen soon on the DC Comics YouTube Channel. The full movie wont be released till June 12th 2012 but if you can’t wait till then you can always pick up the TPBs two volumes on Graphic-novels.net or Amazon.