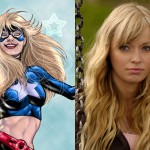 Britt Irvin who is Playing Stargirl in the upcoming Smallville movie Absolute justice has revealed a lot of new information and spoilers about the smallville film on
Fancast.com

“I can’t say too much about this, but there is a death that occurs at the beginning of the episode,” Britt Irvin tells me (Fancast.com). “And that brings the Justice Society of America together with Clark and his team.”

Clark kents “Team” meaning the justice league (justice) including The blur and Green arrow And to put it mildly, not all of these heroes get on great together when they first all meet.

Stargirl has a bit of friction with Green Arrow at the beginning, as does Hawkman,” Irvin said.

Irvin’s superhero quickly establishes herself as one of the Blur’s biggest fans. “She has a special connection with Clark because he reminds her a lot of her mentor,” says Britt. What’s more, when the JSA gets wind (via Doctor Fate) of Clark’s destiny, Stargirl realizes “he’s very important for mankind.”