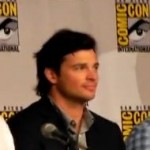 A season 10 preiview has been shown at comic con over the weekend as well of some things we allready know about there are some big surprises. The trailer shows small clips from all the previous seasons, and then at the end season 10 is shown.

One of the first slips in the season 10 preview is Lois holding up Clarks red and blue superman costume that he recieved in season 9.

Also we see the official return of Hawkman and Dr. Hamilton aswell as the return of Supergirl. As we already know Jonathan Kent is returning he is also seen in this trailer.

The biggest surprises in this trailer have to be the sighting of Lex being submerged in water and a mask on,(it’s still unknown if Micheal Rosenbaum is returning)and also we see Lional Luthor in the clip who died in season 7 when he was pushed out of a window.

So we are still not sure of how these characters will be returning, but there will be rumors of this in the forcoming weeks before season 10 airs on September 24th.