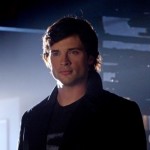 There has been rumors about the title to the premire going around but now can be said that the title is, “Lazarus”.

The term “Lazarus” has been used before on the series, in Season Three, where it was a serum that brought a deceased human back to life for 12 hours, as had happened with Adam Knight. It’s also well-known in the DC Comics universe as the “Lazarus Pit” is a term used in Batman
comics, usually associated with Ra’s Al Ghul. The Pit has rejuvenating abilities that can render someone youthful and nearly immortal.Perhaps one or all of these things are clues on how Clark will survive his fall.