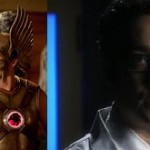 Smallville will be returning on September 24, and for right now we have news of two characters making return appearances.

First, its confirmed that Alessandro Juliani will be making a return appearance in the season premiere“Lazarus”, as Dr. Emil Hamilton.

Then, we also have gotten confirmation that Michael Shanks will again be appearing as Carter Hall, aka Hawkman, in the second episode of the season, titled “Shield.”