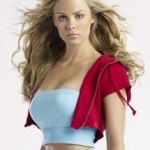 It is now known what the title is for the return ofLaura Vandervoort’s Character Kara Kent. It’s not known where the episode will be in season ten nearer to the start or the end but i can tell you producers Brian Peterson and Kelly Souders have revealed that the title of the episode is “Supergirl.”