Michael Rosenbaum is returning to Smallville 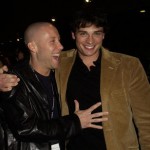 Smallville hasn’t been the same since Michael Rosenbaum had left the cast. Writers had tried to fill the gap by introducing the Justice Society but it still wasn’t the same.

Thanks to Deadline.com we have confirmation that Rosenbaum has changes his mind and will return to Smallville.

“It feels like the stars are aligning, literally. We couldn’t be more excited about having Michael back,” Smallville executive producers/showrunners Kelly Souders and Brian Peterson said. “And as far as the way he returns … there’ll be no doubt about how Lex becomes the great rival in Clark Kent’s life. He is the villain of the story.”