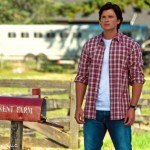 The CW has finally released their official description for Smallville Season 10. Here it is:

The end of the beginning starts here. Taking flight in its tenth and final season, this modern retelling of a hero’s legendary origins continues to blend realism, action, heart and humor as Clark Kent (Tom Welling) soars toward claiming his birthright.

Clark has emerged from his darkest hour, only to find the path to his destiny blocked by ghosts from the past — shadows in the present tempting Clark toward the darkness at every turn. Despite insurmountable odds, is Clark strong enough to step into the light and claim his rightful place as Earth’s mightiest protector?

As “Smallville’s” epic ninth season came to a close, General Zod (Callum Blue) and his Kryptonian Army declared war on the people of Earth. Clark prevented the deaths of thousands, if not millions of humans by using the Kryptonian Book of Rao to stop the attack. The spiritual tome opened a gateway to another world, one where Clark’s people could exist in peace. One-by-one, every Kryptonian on Earth was propelled across the universe, but as Clark prepared for his “ascension,” Zod refused to leave. Using a blue Kryptonite dagger to make himself human and avoid being sucked into space, Zod remained behind so that he could rule a world without its guardian, Clark Kent. Having no other option to rid the world of Zod’s tyranny, Clark plunged the dagger into his own abdomen, protecting himself from ascension — and exiling Zod in the process. Though victorious, Clark’s win was bittersweet as he plummeted off the building and into the darkness below.

After a fateful kiss, Lois Lane (Erica Durance) realized that the two men she had been torn between all season — Clark Kent and Metropolis’ heroic Blur — were one and the same. Having finally found redemption and a second chance at love, Chloe Sullivan (Allison Mack) and Oliver Queen, a.k.a. the Green Arrow (Justin Hartley), were ripped apart. Chloe was forced to painfully listen as the love of her life, Oliver, was abducted by mysterious assailants during his attempt to help Clark defeat Zod’s Army. And Tess Mercer (Cassidy Freeman), heir to the late Lex Luthor empire and double agent for the now-defunct government organization Checkmate, was fatally burned at Zod’s hand in an attempt to right past wrongs. As Tess flatlined in Metropolis General Hospital, she was visited by a shrouded, elderly woman. The granny’s motives…still unknown.

Throughout season nine, Clark, bearing the iconic S-shield of his heritage, struggled to find his place between the human world in which he was raised and the Kryptonian world he was born into. Having made peace with his dual heritage, Clark, in season ten, must now find the courage to step out of the shadows and emerge into the light. Never before has there been such a dangerous time for Clark to step into the public eye and take on the mantle of the inspirational icon he is destined to be. As the tide of sentiment in Metropolis turns against heroes, branding them as unchecked vigilantes, our defender of justice will be called upon to re-define what it really means to be a superhero. Given how dangerously close Clark has skirted to crossing the line in the name of “justice” in the past, will he truly earn the right to be the symbol of good for humanity, or will he prove the naysayers right, that no one individual can be judge, jury and enforcer.

In the midst of this turmoil, a new danger will emerge as a dark force takes on many faces, threatening Clark at every turn. Hawkman (Michael Shanks), Supergirl (Laura Vandervoort), and Jonathan Kent (John Schneider), Clark’s late, adopted father — forever and always Clark’s moral compass, will stand by Clark’s side as he takes his final steps toward accepting his birthright. He will need all the help he can get to fight the impending evil onslaught…the greatest darkness ever unleashed on Earth.

The season ten premiere, “Lazarus,” opens mere seconds after last season’s finale. Clark Kent wakes from his near-death experience, haunted by the ghosts of his past, both friend and foe. Given a new lease on life, Clark must find a way to rid himself of every last temptation, to purge himself of every last shard of doubt in his heart before he can become the beacon of hope the world needs. But a very real threat from Clark’s past has returned to challenge his ascent, causing Clark to question the nature of his crusade.

Lois Lane will face her own crisis of meaning, trying to redefine her place in the world now that she knows Clark’s super secret — but Clark won’t discover that she knows, and that’s the way she wants to keep it. Lois will try her best to keep the mild-mannered reporter at arms’ length in the hopes that a life free of romantic complication will make him a better hero.

Struggling with her own affairs of the heart, Chloe Sullivan will be faced with an impossible question — how much is she truly willing to sacrifice to protect the people she loves? Chloe will take a tumultuous step into danger for the greater good, the hands of Fate, her only guide.

When Chloe vanishes, Oliver Queen will be forced to look long and hard at the circumstances behind it. Blaming himself for her disappearance, Oliver will begin exploring accountability for all his past actions, good and bad — what great lengths will Oliver go to in order to bring his lost love back home?

Having risked her own life in an attempt to become accountable for her own misguided actions, no one is more surprised than Tess Mercer when she wakes, alive and well, in a seemingly abandoned medical facility. But what secrets lie in wait in the recesses of “Cadmus Labs”? And how much is Tess willing to give up to seize her second chance at redemption?