Smallville Season 10: So what can we be expecting? 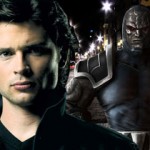 So season nine has now come to an end, but theres still lots of un answerd questions that alot of us will be asking, but cant wait till season 10, which is most likely to be returning in september, to find out.

First off, At the end of the finale we saw Tess in hospital pronounced dead because of Zod, but just who was the old woman in her room? The answer to this most most likely being Granny Goodness, a supervillian in the DC comic world linked to Darkseid ruler of planet Apokolips. A referance to Apokolips was also earlier in the series made by Martha as the Red queen in episode “Hostage” so with Granny Goodness this could result with Tess returning alive as one of Darkseid’s minions… or even Granny goodness turning her into on of her Female Furies.

Speaking of Darkseids minions, The Parademons theres still the question of who took olvier because if it wasnt the kandorians.. who? well if we’re believing this about Darkseid and his minoins coming this is the most likely answer.

But we still don’t know what will be happening to Clark the last we saw was the fight between him and Zod where Zod infeced Clark with blue Kryptonite ,which will be turning him into a mere human, and Clark being thrown of a building the reason he wasn’t affected and taken away by the Book of Roo. So we’ll have to find out how he’ll survive the fall and how he’ll get his powers returned.

Season 10 of Smallville is rummored to be returning in septemer. Also everything in this article are just rumors none of this has been confirmed just very strong rumors.