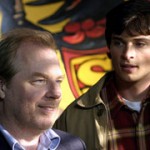 Another familiar face this season will be Annette O’Toole’s husband,Micheal Mckean who will be returning as future editor of the Daily Planet, Perry white,k who we havn’t seen since series 3. And now We finally get to see the legendary introduction between Perry White and the intrepid Lois Lane.