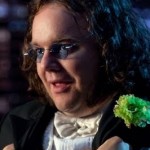 While at a gala meeting at Queen industries that Tess forces Oliver to attend to put the board at ease, the Toyman shows! and with a bomb planning to take revenge on Oliver, Toyman tells Oliver that he must confess to murdering Lex, or the whole place will blow up. while with Clark Jor el gives him the power to hear other peoples thoughts as part of his training.