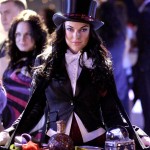 Episode “Hex” from last series 8is Scheduled for a repeat on the CW to prepare watchers for episode “warrior” and to remind them of Zatanna who is appearing the episode.

The CW will be airing a special repeat of that episode after the next new Smallville on January 22.

Expect “Disciple” (the new episode) to air at 8PM with “Hex” immediately after, at 9.

Heres the “Hex” trailer for those who dont remember.