Justice society back in Smallville?! 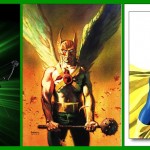 At the Emerald City Comic-Con in Seattle this weekend, Geoff Johns said among other things that the Justice society are making a second appearance this season.

“They do appear again at the end of season on ‘Smallville.’ The hope is for every DC character to appear outside the comic book. Correctly.”

Could the JSA be back in time for the season finale? Or could Clark team up With the JSA to defeat Zod and the Kandorians? We will have to wait and see what’s to come nearer the end of the season.