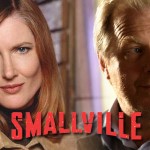 In an earlier page it was confirmed that Clarks earth mother Martha Kent would be returning to smallville in season nine, also on that page it was said that journalist Perry white (Annette O’Toole’s real life husband) who hasnt been seen since he guest stared in season 3. well now it can be said that Martha will be returning along with her new boyfriend Perry white.

Also in the episode Lois and Perry will realize they are both working on the same story about the Red Queen, and will decide to team up, and.. Chloe will help Clark search for the Book of Rao, which they believe will contain information on how to stop Zod and his army.

“Hostage” will be aired on may 7th ont the CW.