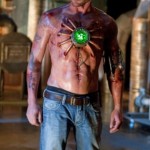 After being hit by a truck John Corben aka metallo wakes up in a empty apartment and finds himself half me half machine, with a kryptonite heart and superhuman powers. He then goes and seeks revenge on the vigilante the red blue blur aka Clark Kent and even though Clark does not want her to Lois still gets involved and ends up getting kidnapped by Metallo.