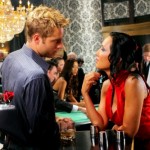 Victoria aka Roulette drugs and kidnaps Oliver, she then tells him that hes involved in a dangerous game and has to fight for his life! After Victoria is found dead and Oliver gets arrested, he turns to Chloe for help, Lois gets mad with Clark for not telling her about Oliver’s suicide attempt.