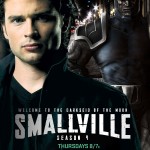 Season nine of Smallville’s return episode “Disciple” has had a delay on airing, it was brought up by a CW worker on twitter that it would be delayed, and now confirmed by the CW that it will be delayed. The reason for this it that them and most other Tv networks will be having a “Hope For Haiti” telethon.

We have confirmation that Smallville’s return episode “Disciple” will now air on January 29.

And that”Absolute Justice” will still be running on February 5 as planned, and the revised air date for “Warrior” is at this time unknown.